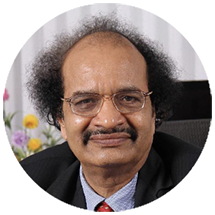 Professor G. D. Yadav is the Founding Vice Chancellor and R.T. Mody Distinguished Professor, and Tata Chemicals Darbari Seth Distinguished Professor of Innovation and Leadership of the Institute of Chemical Technology (ICT), Mumbai, which is a Deemed-to-be-University having elite status and Centre of Excellence given by State Assembly on par with IITs/IISc/IISERs. He is J.C. Bose National Fellow and Adjunct Professor at the University of Saskatchewan, Canada, RMIT University, Melbourne, Australia and Conjoint Professor, University of New Castle, Australia. He was also appointed Adjunct Professor at RMIT University, Melbourne, Australia.  He was conferred Padma Shri by the President of India in 2016 for his outstanding contributions to Science and Engineering. He is internationally recognized by many prestigious and rare awards, fellowships and honours for his seminal contributions to education, research and innovation in green chemistry and engineering, catalysis, chemical engineering, biotechnology, nanotechnology, energy engineering and development of clean and green technologies.

He has won over 125 national and international honours, awards, fellowships, editorships, etc. Several Life Time Achievement Awards have been bestowed on him by prestigious organizations. He is an elected Fellow of all National Science and Engineering Academies in India which is rare:  Indian National Science Academy (INSA), Indian Academy of Sciences (IASc), National Academy of Sciences, India (NASI), Indian National Academy of Engineering (INAE) and The World Academy of Sciences, Trieste (TWAS). He is a Fellow of Royal Society of Chemistry, UK, Institution of Chemical Engineers, UK, Indian Institute of Chemical Engineers, Indian Chemical Society, and Indian Society for Technical Education, among others.  His research productivity is phenomenal: supervision of 97doctoral and 107 masters theses,  439 original research papers, 95 national and PCT patents; 3 books; h-index of 56, i10 index of 239;  11,000+ citations in journals, patents, books and monographs. In 2019 he was awarded Murarka Trust’s the most productive professor award in ICT including his research group as the best.  He is one of the topmost engineering scientists and academicians in India, who despite being an administrator, is still actively involved in guiding Ph.D., patenting, publishing, consulting and transferring technologies to industry.

The American Chemical Society (ACS) published a Festschrift (special issue) of Industrial and Engineering Chemistry Research (2014)  in his honour with 65 original research papers by scientists from all over the world. Prof. Yadav is the Founder President of ACS India International Chapter. He is on editorial boards of prestigious journals like ACS Sustainable Chemistry & Engineering, Green Chemistry, Applied Catalysis A: Gen, Journal of Molecular Catalysis A: Chem., Catalysis Communications, International Journal of Chemical Reactor Engineering, Clean Technologies and Environmental Policy, Current Catalysis, etc. He is the Founding Editor-in-Chief of Catalysis in Green Chemistry & Engineering (2017, Begell House, USA).

He has been a member of or has chaired several national and international committees of   MHRD, DST, DBT, UGC, AICTE, CSIR, the PSA’s on Green Chemistry, the Planning Commission’s Pan India S&T Committee, and the Government of Maharashtra’s Rajiv Gandhi S&T Commission Peers Group. He was Chairman, Research Council, CSIR-CSMCRI, member of RC of IICT Hyderabad and NIIST Trivandrum. He has served as a Chairman/member of Selection Committees of directors of many CSIR labs. He serves on two renowned public limited companies: Aarti Industries Ltd and Godrej Industries Ltd and one limited company, Clean Science and Technology Pvt Ltd as Independent Director.

Under his able guidance and with an objective of upskilling industry professionals; ICT has recently launched Executive M. Tech. In-Process Engineering (e-M. Tech.) for Industrial Personnel.