The myth of Face Velocity

When you look at your fume hood monitor/alarm and you see a face velocity reading of 0.3MPS to 0.5MPS, what is that really telling you? Many people believe that this number is an indication that the fume hood is ensuring safe air quality in their laboratory. So, you might be surprised to learn that there is no relationship between face velocity and containment.

For many years, the way to make sure a fume hood was exhausting properly was to install a manometer to monitor differential pressure (DP). But because the DP is always shifting, it was hard to tell a user what the number should be to ensure containment was achieved. Observation of the DP numbers actually exposed the failure of fume hoods to maintain consistent differential pressure, which is necessary for containment.

In the search for a better measure of performance, face velocity, a measurement of air speed at the inlet of the fume hood, became the standard indicator of fume hood effectiveness. Average face velocity was more consistent than DP. It was simple to read and made it easier to sell safety. I have tested thousands of fume hoods and of those that failed the tests, most maintained the prescribed average face velocity. So, how can a fume hood have a 0.3 or 0.5 face velocity and still lose containment? The answer is somewhat complex, but let’s break it down into individual elements.

What is face velocity? ASHRAE 110 defines face velocity as the average velocity of air moving perpendicular to the hood face, usually expressed in feet per minute (FPM) or meters per second (MPS). It is a simple measure of air going into the fume hood.
In the Laboratory Ventilation Standard, ANSI/AIHA Z9.5 (page 22) it says:
“Face velocity had been used historically as the primary indicator of laboratory hood performance for several decades. However, studies involving large populations of laboratory fume hoods tested using a containment-based test like the ANSI/ASHRAE Standard 110, “Method of Testing the Performance of Laboratory Fume Hoods,” reveal that face velocity alone is an inadequate indicator of hood performance.”

What does face velocity tell us? In the simplest terms, it tells us that air is going into the hood and eventually being exhausted. It tells us that the laboratory exhaust system is functional. It is an indication of the volume of air being drawn into the hood. But, air being drawn into the hood isn’t an indication of what happens after the air enters the hood. What is happening in and around the hood determines the hood’s performance. When we look at the function of a fume hood (capture-contain-dilute-exhaust), face velocity gives us little insight into whether that is happening.

Many installed hoods fail to maintain containment and this failure allows degradation of the air quality in the laboratory and exposes users to potentially hazardous chemicals.

I was recently in a manufacturer’s factory showroom. The sales person was telling me how safe their fume hoods are. So, I asked, “How do you know your hood is safe?” The answer was, “Because we have a good face velocity.” The reality is that most people selling fume hoods don’t really understand how they work.

Face velocity is a false indicator of safety. Let’s look at how this misconception evolved. For decades, fume hoods were only turned on when they were used. Each hood had its own blower. So, it was important for the operator to know the hood was turned on. The velocity alarm was wired to the fume hood light. So, when the user turned the light on, it turned the alarm on. If the exhaust fan was not turned on, a low velocity alarm would sound. In the past, most of the fans were belt driven. It was common for the belt to stretch with use and the fan to slow down, reducing the face velocity. Therefore, the number that could be read on the face velocity alarm was an indication of fan performance. However, that is not the same as fume hood performance. This disconnect between face velocity and fume hood performance has continued through the years.

The relationship between face velocity and containment would only be valid if the hood was a true laminar flow device and if the air flow was two dimensional. But, a traditional fume hood is anything but laminar. Most fume hood are very turbulent.
A method of measuring fluid flow patterns (which is also applied to air flow) is known as the Reynolds number (Re). This number is used to determine whether the fluid flow is laminar or turbulent. Laminar flow occurs only at Reynolds numbers below 2000 when air flows in parallel layers, with no disruption between the layers. At low velocities the fluid(air) flows without mixing and adjacent layers slide past one another like playing cards. In laminar flow, the air flow is very orderly with all particles moving in straight lines parallel to the vessel walls. Turbulent airflow occurs at higher Re numbers above 4000 and is dominated by inertial forces. This produces random eddies, vortices and other flow fluctuations. Face velocity tells us nothing about the turbulence within the fume hood that can lead to loss of containment.

Fume hoods are in fact very turbulent. The reason for this turbulence is that the air entering the hood has both vertical and horizontal components. The airflow isn’t two dimensional, it is three dimensional. And unlike a pipe or a duct, that has a 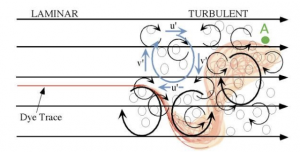 static set of conditions, a fume hood is very dynamic. Every time the sash is opened or closed the entire airflow changes. These changing airflow patterns have an impact on containment. With turbulence comes disruption of airflow and reverse airflow. This chaos offers the potential for chemicals to be pulled out of the hood and into the laboratory.

When you look at testing results done by a manufacturer, keep in mind that they were conducted under presumably perfect conditions with an empty fume hood. A hood that tested well in a manufacturer’s test room at 0.3 MPS is little indication of how it will perform in a real-world laboratory. People buying fume hoods want to know that the devices are performing effectively and protecting them.

Users do not work in an empty hood. When you load the hood and stand in front of it, everything changes. So, if we want to evaluate safety, we must look at much more 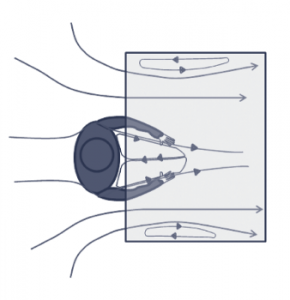 than face velocity. Yes, you need adequate face velocity for the hood to function safely, but there are many other factors that are more directly related to containment.

One such factor is the differential pressure (DP) between the inside of the hood chamber and the room. DP is a much more accurate indicator of containment. What is differential pressure? It is the pressure difference between two areas. Differential pressure determines the direction of the airflow. Air will move from the high-pressure area to the low-pressure area. With a fume hood, we want the low-pressure area to be deep within the hood chamber to facilitate exhaust. But the room conditions cause the pressure to continuously shift. As the low pressure within the hood weakens, it is easier for the turbulent airflow to pull contaminates out of the hood. Monitoring the DP would give us a better indication of containment.

Another factor is turbulence, both inside the hood and outside the hood. Those straight lines you see in a typical CFD (Computational Fluid Dynamics) model are 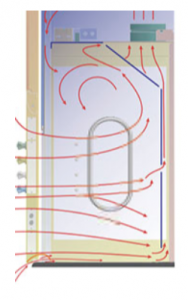 not really laminar as they appear in the models. These models have been greatly simplified based on model limitations and the available computer power. The air flow actually looks more like smoke rather than the straight lines in the model. The air is disrupted based on the mixing of the horizontal and vertical air components. All fume hoods have a degree of reverse airflow which can pull containments out of the hood during shifts of differential pressure. Measuring turbulence levels would provide an additional indication of what is actually happening to the air in the laboratory.

In conclusion, the current practice of using face velocity as a measurement of safe air quality is misguided. When you look at fume hood tests such as ASHRAE 110-2016 AM and EN 14175-3-2019, they measure fume hood effectiveness under perfect conditions. Real-world laboratories are anything but perfect. Additionally, in the test laboratory, you are looking at the properties of the fume hood only. Until you connect a fume hood to a laboratory ventilation system, you have no idea how it will perform. Performing a test such as ASHRAE 110 – AI (as installed) or AU (as used) is the only way to know if your fume hood is actually achieving proper containment. Face velocity is just one factor in fume hood performance and used alone does not indicate that a fume hood is maintaining safe air quality in the laboratory. So, the next time you look at your face velocity monitor/alarm, ask yourself, “What more should I be doing to ensure safe air quality in my laboratory?”